Tensho kata means “Turning hands, Rolling Palms or revolving hands” created by Miyagi Sensei. This emphasizes the softness of the art, as opposed to the hardness it is one of the two main katas of Goju-Ryu karate, “go” translates as hard “ju” translates as soft. This kata has its roots in White Grane boxing and Monk Fist boxing and is influenced by Nahate village area in Okinawa which became the style known today as Goju Ryu.

Tensho partnered work, sticky hands training (Chi Sau) (Kake Uke) developing sensitivity enabling the students to read their partners intentions. This is not an application to the Tensho form, it’s the connectivity, redirecting and controlling skills whilst preforming an application. To develop this skill isolation is the key point behind these drills. These drills are about flowing with your partner rather then pushing them away, not meeting muscle with muscle. There is an old saying in the internal Martial Arts “Knowing yourself is knowing how to move, (the form) Knowing the enemy is feeling his movement”. Adhere Sticking to the opponent’s one point and not moving from it. Adhere and stick are done with the hands, connect and follow are done with the feet. Tensho does not use muscle against muscle but uses an expanding force which sticks on the outside but compresses on the inside, making it soft on the outside and hard on the inside. The two yins working to support each other, Yin soft and Yang hard, these two forces are balanced thus supporting each other through the performance of the kata and appilcation.

It is the beauty and versatility of this kata that makes it so special. It can be
appreciated through the gracefulness of its movement practised slowly and with
Rhythmic breathing (which has clear health benefits). Its apparently effortless
Circular movements can redirect and nullify aggressive acts with seemingly
minimum effort. In addition, there is the philosophical and humanitarian aspect
Within the form, and various masters emphasise its importance for moral character and good judgement. Finally, it includes devastating striking power that, used as a last resort, is unquestionably effective. 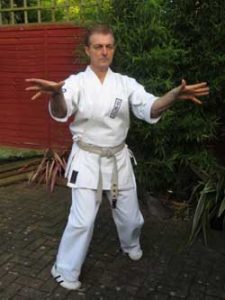