Seishan translates as half moon or thirteen. The thirteen indication that the kata should be preformed with only 13 breaths, in order to teach proper breath control in kata performance. Seishan is a Nahate kata which is typical of the stance and speed of the first half. The kata is preformed in Seishan stance which is the largest of the inner circular stances. The first half of the kata is preformed slowly with the right exchange of tension and relaxation, coupled with power in Yoko Seishan stance in a (wide front facing stance), then fast explosive in Tate Seishan (vertical stance). Its also one of the oldest of the Okinawa katas next to Sanshin and has its links to White Crane boxing styles from Kung Fu. 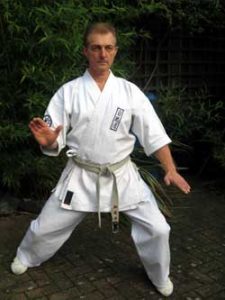 Versions of Seisan taught today have roots in Shuri-te, Naha-te and Tomari-te streams of karate (that is the karate that was traditionally taught in the Okinawan towns of Shuri, Naha and Tomari) Styles that have Seisan include: Goju Ryu, Shorin Ryu, Uechi Ryu, Shito Ryu, Okinawa Kenpo, Ryukyu Kempo, Ryute, Ryuei Ryu, Wado Ryu, Shotokan, Chito Ryu, Koryu Uchinadi, Seibukan, Seidokan so you’ll get the idea this kata is well travelled. One thing most researchers agree upon, is that the movements for Seisan, in all of its original variations, were likely imported from Fuzhou, China. Specifically, it seems likely that it was part of the training regimen of the White Crane families who resided there (more specifically, Kinjo Akio suggests that it derives from the Yong Chun White Crane branch). Over time Seisan has evolved on Okinawa while fading in China to a point that a direct mirror form can no longer be found in Chinese styles. The variations found on Okinawa contain pieces of the original concepts, stylistically emphasizing different ideas and growing in ways that agree with the overall construct of each Okinawan method.