Translates as ‘viewing the sky’. It supposedly gets its name from the opening move, making a circle with both hands. Northern Shaolin in origins is from the Chinese system of martial arts, again supposedly brought over by visiting officials to Okinawa. In Shingo Ohgami book Karate Katas of Wado Ryu, he likens Kushanku to the Chinese system with various combinations of turns, jumping with explosive release of energy as found in White Crane Kung Fu. Shaolin monk. Kusanku is a cornerstone of many styles of karate. It is characterized by the use of flowing techniques that resemble those found in White Crane Kung Fu; The longest kata in our system with the most exchange of differing stances. In this kata the execution of the techniques has to be done with the right exchange of tension and relaxation to be able to maintain the flow. There are many stances applied within the performance of the kata employing strong powerful movements and fast execution of techniques, with twist and turns and the notable dropping technique. One of the most difficult of katas to master, but through consent training the required skill is developed and a strong agile body is forged 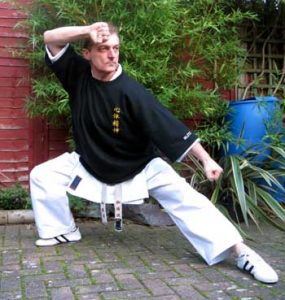 Kusanku also known as kushanku, Kosokun or Kwang Shang Fu Kwang Shang Fu, and was the name of a Chinese martial arts expert. A master of the northern Shaolin Quanfa, coming in 1756 as a ambassador of the Chinese Ming Emperor to Okinawa, who lived during the 18th century. He is credited as having an influence on virtually all karate derived martial arts. The name Kushanku/Koshokun consists of the letter Ko (public, official), Sho (minister) and Kun (a suffix for persons, means also “master, ruler). This shows that it may be a title, but it is also possible, that it may be used as a normal name.
Described as an expert of the Chinese hand art of Kempo (more specifically, kumiai jutsu), shipping records reveal that Kushanku, with a retinue of aides traveled to Okinawa with the Ching Sapposhi, Guan Ki, during his trade excursion in 1756. The historian Shiohara’s description of Kushanku’s demonstration of his fighting art leaves little to question, and the description remains the most reliable chronicle surrounding Chinese civil fighting traditions in early Okinawa. There can be no doubt that Kushanku and his disciples gave a public display of the Chinese fighting disciplines, and were likely engaged in transmitting to people of wealth, position and power.” (Patrick McCarthy)
“The Art is the Flow the Flow being the Art”