The translation of Chinto kata is “Crane on the rock”, from the one legged stance seen half way through the from or Fighting to the East. It’s a light yet powerful moving form, and is classified as a Tomarite kata with strong fluid foot work changing rapidly, but never rushed. Balance with control coupled with turns make this kata a difficult one to master, hence this is the kata shizendo uses for black belt. The Chinto form follows a straight line of movement and should be executed with powerful techniques. Chinto kata form use  the one-legged stance (Sagi Ashi Dachi or Chinto Dachi) repeatedly, which resembles the sight of a crane poised on a rock and about to strike.  It also uses flying kick, which distinguishes it from other katas. The structures and techniques employed in this kata are amalgamation of all other techniques and concepts aligned on a narrow stance and performed in a fluid motion facilitating control, power, speed and agility. 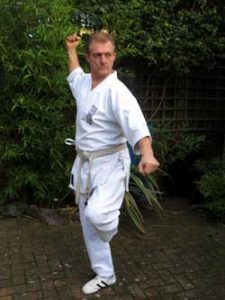 Bushi Matsumura created Chinto kata (1797-1884) and was structured from techniques he learned from a Chinese sailor named Chinto who became shipwrecked on the Ryuku Islands. Chinto taught the inhabitants of the Tomari village including, Matsumura, Kosunku, and Oyadomari. Matsumura studied with the famous Karate Sakugawa, who spent significant time studying martial arts in China. It was Sakugawa that brought many kata to Okinawa and initiated many kata such as Kusanku kata.

Though the exact meaning of chinto is uncertain, one translation of the name means, “fighting to the east” while another is “fighting in a city”. The form was probably named after its originator or pointing to the east as in the direction to China. Matsumura is credited with integrating the Chinese Chuan Fa with the Okinawan Te creating Tode (1750) which evloved into Shuri-Te (1830) which evolved into Shorin-Ryu (1870)