The weapon session will cover Tonfa (side handled baton) and Escrima Stick plus introduction to the Sai .

Students will be divided into two groups to focus on one weapon for the training session thus covering two weapons for this course plus the introduction to the Sai weapon also. Training will mainly consist of kata with a look to practical application within pairs work. Also how the use of the weapon relates to the students current martial arts training thus cross referencing to other Kata. Weapons will be provided, but students can purchase on the day  or bring their own. For more details of this see your club instructors.

To be able to use a weapon/weapons a students needs to understand some fundamentals with regards to movement, postures and body alignment coupled with how to gain power from body dynamics which bring out the power of the weapons and associated skills. the weapon is only as good as the person using it and the weapons of choice also develops other attributes.

This is open to all adult grades and child grades from 4th Kyu and above. 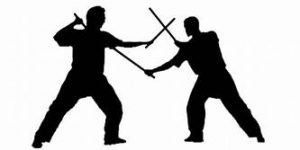 Balintawak Arnis is a form of Filipino martial art whose inception started in the early 1950’s by Venancio “Anciong” Bacon. In Balintawak Escrima, the “olisi” (rattan stick) is used primarily as a training tool to familiarise students with weapons and blows. The olisi represents a Filipino sundang or bolo. The theory is that the stick is an extension of the arm and that the body can only move in so many ways.

In Balintawak, the student is taught that there is a defense and counterstrike for every attack and subsequent counterstrike delivered by the opponent. In short, a counter for every counter.

Balintawak can be like a dance – elegant, balanced, and sometimes baffling. The techniques are direct and fundamental. He taught “suyop” a visayan word for “sucking” which means to draw in your opponent.

Anciong also believed in continuous research and discovery and he was often seen walking along Colon Street in Cebu, ducking and weaving. He was shadow fighting, constantly thinking of scenarios of possible attacks and its counters.

Balintawak is reaction based, training the body’s reflexes and balance thus wonderful for developing agility, flexibility and coordination. Anciong’s catchphrase was, “Simhota ko dong!” verbally translated it means come and smell me. It actually means, “Come and sense me!”

Balintawak focuses on learning defense rather than offense. An offensive attack is inherent in everyone. Even a two year old kid knows how to hit.

Reacting in a protective manner is something that needs to be refined. After all, we go out in public without the intention to attack anyone. More often, we don’t expect to be assaulted and it is vital to know some form of self defense.

Balintawak practitioners, in its early days, were taught to be fighters. Part of the knowledge imparted to them was psychological warfare. And they were taught to ignore the pain if they were hit.

Back then Balintawak training was shunned by some because it was considered to be a brutal way of learning a martial art. Only the patient and strong took part. Daily practice at Balintawak Street produced blood and welts.

It was also at the time a closed system, where only family members were taught. Non-blood relatives who did get invited or accepted became part of the family. Family and Christian values were upheld especially respect for the elders.

Balintawak was considered to be “sagrado” or sacred. A divine art given to Anciong and learning Balintawak was a privilege. Some teachers of Balintawak refused payment from devote students.

Anciong disliked stick twirling. He considered it unnecessary and impractical in real fights. He further developed his style which dealt a simple block for an attack followed by an immediate counter. Anciong Bacon started his own group because he thought that training should concentrate on defense, one block followed by one counter, rather than attack. There is no limit as to what part of the body may be hit, and control of power and technique is taught in order to protect the training partner. Injury is avoided and safety is imposed.

Balintawak is not a sport. There are no rules when a person is being attacked in the street. What is considered foul in other arts is taught in Balintawak.

The word “Balintawak” also refers to the area in Luzon where Filipinos, in the late 1800’s first started their revolution against Spanish rule. The “Cry of Balintawak”, was understood to refer to the first skirmish between the katipuneros and the guardia civil. It is now taken to refer to the tearing of the cedulas, or community tax certificates, followed by patriotic shouts, to mark their withdrawal from Spain.

The Filipinos fought with what weapon they had, their bolos and sticks. The few guns and little ammunition they had were mainly captured from the Spanish forces.

Little by little, the revolutionary forces gained ground in Visayas and Luzon. At one point, the revolutionary leaders were reported to have written to the leaders of the kingdoms in Mindanao only to be told that they have been fighting the Spaniards for the last 300 years.

The spread of Balintawak to the world was made easier when Attorney Villasin broke down Anciong’s system to groupings. These levels of skill ensured that students became increasingly adept with Balintawak.

Teofilo Velez embraced this form of education and to his credit, students of “Teovel”, notably Bobby Taboada and Nene Gaabucayan, primarily introduced this form of Filipino Martial Art to Europe and the United States. Bobby Tabimina is also currently introducing his form of Balintawak to the rest of the world.

Anciong taught at the back of a barber shop at Balintawak Street in Cebu. Anciong’s Arnis being a non-conformist art fittingly became christened Balintawak.

Although the tonfa is most commonly associated with the Okinawan martial arts, its origin is heavily debated. One of the most commonly cited origins is China, although origins from Indonesia to Thailand are also possible. Okinawan tradition derives the tonfa from a millstone handle. The Chinese and Malay words for the weapon (guai and topang respectively) literally mean crutch, which may suggest the weapon originating from the crutch. In Cambodia and Thailand a similar weapon is used consisting of a pair of short clubs tied onto the forearms, known in Thai as mai sok and in Khmer as bokgatau. In Thailand and Malaysia the mai sok often has a similar design to the tonfa, with a perpendicular handle rather than being tied on. This weapon might be the original version of the tonfa.