Breakdown of the Mon

Please use the downloads provided for club use to understand the meaning of the Mon and to develop the necessary understanding of the karate terminology found in class training sessions, both for the children and adults.

Translation of the Mon

our movements revolve to blend with the force thus neutralising an attack.  From

this circular motion we direct our attack to the closest point on our opponent, this is what

triangles within the circle pointing outwards. Each triangle is divided into black and

white reflecting a Yang (hard) or Yin (soft) attack, between the eight triangles can be

one of the Yin Yang triangles is used to simultaneously meet this force, the yang part

is to ground and the Yin part is used to neutralise. The eight triangles also reflect the

eight directions, North, South, East and West as well as the four corners, all points of the

triangles are attached to a circle which upon contact will turn. Each of these circles remind

us of the four distances, the outside circle would be kicking range, the next circle is

interplay of Yin and Yang throughout our whole body, because we become the spinning

ball in a constant state of flux. Lastly the Yin Yang symbol in the Centre of the Mon

is to internalise this concept and never to deviate form our Centre. 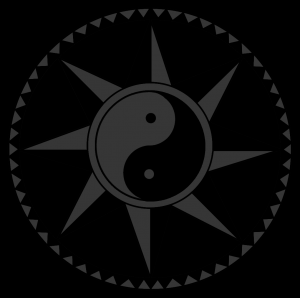