Go Shin Jutsu is commonly translated as “Self-Defence Technique” (or sometimes Self-Defence Art). Looking at the kanji which make up this term, the translation seems straightforward–“Go” (護) is usually translated as “defence” or “protect”, “Shin” (身) is translated as “body” or “one’s self”, and “Jutsu” (術) is usually “technique” or “art” (more details regarding jutsu are available in my prior post). However, if you look further into these characters, and in particular “Shin” (身) , you’ll find that there’s more to the meaning of go shin jutsu than the typical translation.
___
#Oyata sensei taught that the kanji “身” shouldn’t be translated simply as “body”, but instead as “life”. While you won’t find that translation in a modern Japanese dictionary, study will reveal that the pictogram which formed the original Chinese character (Japanese characters are derived from older Chinese characters, which started as pictograms and were developed over centuries) is of a pregnant woman walking down the street. Even in the modern Japanese character, you can see her head, pregnant body and legs in motion reflected in the kanji. Most people who notice pregnant women quickly think about the fact that she is brining life into the world. With that as context, it is easy to understand why Oyata sensei said that “Shin” should be translated as “life” rather than “body”.
___
Thinking of that character as meaning “life” changes your perspective on “Go Shin Jutsu”. Rather than being self-focused, the practitioner of Go Shin Jutsu should be concerned with all life. Thus, Oyata sensei translated “Go Shin Jutsu” as “Life Protection Art” (Shin = Life, Go = Protection and Jutsu = Art) to reflect this key difference. This unique take on the term is reflected in techniques Oyata sensei’s art which are designed to dissuade the attacker before hurting them, to hurt the attacker before injuring them, and to injure the attacker before maiming or worse. A practitioner of Go Shin Jutsu–of a Life Protection Art–is responsible for not only their own life, but the life of the attacker as well. 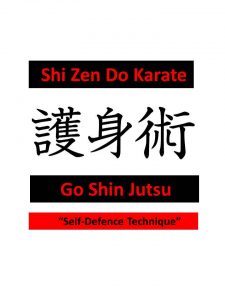