Self-Defence Course session will cover application and techniques related to Karate and Tai Chi Chuan training.  Practical , simple and effective techniques relating back to kata and why each art has its own system of self protection embedded into its training methods.

Please note: places are limited space available on the Self-Defence Course and will be given on a first come, first served basis. 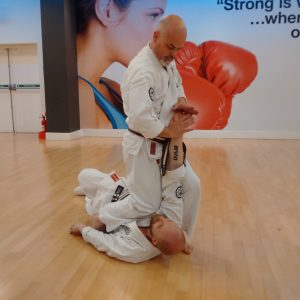 It is a universally accepted principle that a person may protect themselves from harm under appropriate circumstances, even when that behavior would normally constitute a crime. In the United States legal system, each state allows a defendant to claim self-defense when accused of a violent crime, as does the federal government. The specific rules pertaining to self-defense vary from jurisdiction to jurisdiction, however. This article offers explanations of the broad concepts that make up self-defense law in the US, but you should check the laws of your particular jurisdiction to understand the specific requirements for a claim of self-defense.

Self-defense is defined as the right to prevent suffering force or violence through the use of a sufficient level of counteracting force or violence. This definition is simple enough on its face, but it raises many questions when applied to actual situations. For instance, what is a sufficient level of force or violence when defending oneself? What goes beyond that level? What if the intended victim provoked the attack? Do victims have to retreat from the violence if possible? What happens when victims reasonably perceive a threat even if the threat doesn’t actually exist? What about when the victim’s apprehension is subjectively genuine, but objectively unreasonable?

As you can see, self-defense is more complicated than it first appears. In order to handle the myriad situations where self-defense arises, states have developed rules to determine when self-defense is allowed and how much force a victim can use to protect themselves. As mentioned, the exact rules differ between states, but the considerations are largely the same.

Is the Threat Imminent?

Moreover, the use of force in self-defense generally loses justification once the threat has ended. For example, if an aggressor assaults a victim but then ends the assault and indicates that there is no longer any threat of violence, then the threat of danger has ended. Any use of force by the victim against the assailant at that point would be considered retaliatory and not self-defense.

Was the Fear of Harm Reasonable?

Sometimes self-defense is justified even if the perceived aggressor didn’t actually mean the perceived victim any harm. What matters in these situations is whether a “reasonable person” in the same situation would have perceived an immediate threat of physical harm. The concept of the “reasonable person” is a legal conceit that is subject to differing interpretations in practice, but it is the legal system’s best tool to determine whether a person’s perception of imminent danger justified the use of protective force.

To illustrate, picture two strangers walking past each other in a city park. Unbeknownst to one, there is a bee buzzing around his head. The other person sees this and, trying to be friendly, reaches quickly towards the other to try and swat the bee away. The person with the bee by his head sees a stranger’s hand dart towards his face and violently hits the other person’s hand away. While this would normally amount to an assault, a court could easily find that the sudden movement of a stranger’s hand towards a person’s face would cause a reasonable man to conclude that he was in danger of immediate physical harm, which would render the use of force a justifiable exercise of the right of self-defense. All this in spite of the fact that the perceived assailant meant no harm; in fact, he was actually trying to help!

Sometimes a person may have a genuine fear of imminent physical harm that is objectively unreasonable. If the person uses force to defend themselves from the perceived threat, the situation is known as “imperfect self-defense.” Imperfect Self-Defence does not excuse a person from the crime of using violence, but it can lessen the charges and penalties involved. Not every state recognizes imperfect Self-Defence, however.

For example, a person is waiting for a friend at a coffee shop. When the friend arrives, he walks toward the other person with his hand held out for a handshake. The person who had been waiting genuinely fears that his friend means to attack him, even though this fear is totally unreasonable. In order to avoid the perceived threat, the person punches his friend in the face. While the person’s claim of self-defense will not get him out of any criminal charges because of the unreasonable nature of his perception, it could reduce the severity of the charges or the eventual punishment.

Some states also consider instances where the person claiming Self-Defence provoked the attack as imperfect Self-Defence. For example, if a person creates a conflict that becomes violent then unintentionally kills the other party while defending himself, a claim of Self-Defence might reduce the charges or punishment, but would not excuse the killing entirely.

The original laws regarding self-defense required people claiming Self-Defence to first make an attempt to avoid the violence before using force. This is also known as a “duty to retreat.” While most states have removed this rule for instances involving the use of nonlethal force, many states still require that a person make an attempt to escape the situation before applying lethal force.