The student will now take a closer look at weapons of choice, in-depth

study of the form and application. Tonfa and stick, will cover pairs work also.

Your current martial arts licence covers the training with weapons.

Please note: places are limited and will be given on a first

THIS FORM MUST BE COMPLETED AND HANDED IN TO YOUR CLUB

INSTRUCTOR (with the appropriate payment of £15.00 per student)

Cheques made payable to Kobudo Supplies

If you require more information please speak to your club instructor. 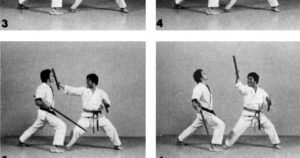 Although the tonfa is most commonly associated with the Okinawan martial arts, its origin is heavily debated. One of the most commonly cited origins is China, although origins from Indonesia to Thailand are also possible. Okinawan tradition derives the tonfa from a millstone handle. The Chinese and Malay words for the weapon (guai and topang respectively) literally mean crutch, which may suggest the weapon originating from the crutch. In Cambodia and Thailand a similar weapon is used consisting of a pair of short clubs tied onto the forearms, known in Thai as mai sok and in Khmer as bokgatau. In Thailand and Malaysia the mai sok often has a similar design to the tonfa, with a perpendicular handle rather than being tied on. This weapon might be the original version of the tonfa.

The sai  is a traditional piercing melee weapon used in Okinawa. The basic form of the weapon is that of a pointed, prong shaped metal baton, with two curved prongs (yoku) projecting from the handle (tsuka). There are many different types of sai with varying prongs for trapping and blocking.