Naihanchi karate kata is a Shurite system kata, its performance is strong sharp explosive movements executed in a side ways motion with one simple step either side of the start position. The movements are preformed in two equal parts, first to the right then to the left keeping in Naihanchi stance all the way through the kata. This stance is called the inner circular stance and preformed side on, both feet pointing inwards. Power is harnessed through the action of the feet position and the turning of the hips against the upper body. The kata has many possibilities in regards to function, it can be a striking  with locks and throws coupled with pressure points, (kyusho) and evasive movements through off balancing (kuzush). The simple Embusen of Naihanchi, the side-to-side positioning can be used effectively in three dimensions, against an opponent with multi techniques drawing the opponent into dynamically explosive techniques and rooted footwork. 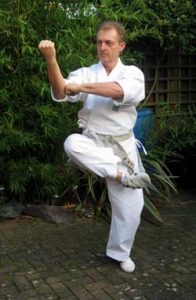 Naihanchi is the name of a kata that appears in many karate systems, and goes by multiple names. The most widely accepted is Naihanchi or Nai Hanchi, which is the Japanese pronunciation. It can also be called Naifanchi, Naifanchin, or Naifanchen (the Okinawan pronunciation). It has also become known as Tekki, a change produced by Funakoshi Gichin when bringing the kata from Okinawa to Japan.The form traces its roots back to Bushi Sokon Matsumura.

Matsumura was a renowned martial artist and served as bodyguard/retainer for three Okinawan Kings. In his younger days he learned from Okinawan masters such as, Tode Sakugawa, but was also exposed to many Chinese envoys and warriors throughout his travels for the king. It is believed that he learned Naihanchi from a Chinese influence, either on Okinawa or while abroad, and then infused it with his own Te.